ABOVE PHOTO BY JANEEN MICHIE

In recent years I have been asking my colleagues, ‘What is the next step that you, your staff or organisation must take to continue your contribution to the Bible translation movement?’ It’s a question that lies at the core of Wycliffe Australia’s Next Step Development initiative.

The English Immersion Experience run at our Kangaroo Ground National Centre for our Indonesian partners was a direct result of that question. More recently, the same question was asked of the director of the Bible Translation Association (BTA) of Papua New Guinea, Tony Kotauga. Tony requested that Wycliffe Australia invested in mentoring a PNG university graduate, Barton Maino.

When Tony Kotauga asked Barton to join BTA as Business Manager, the challenge was straightforward. Could he help put BTA on a more stable financial footing? BTA property had become a financial drain and BTA was almost solely dependent on external international funding.

With support from Wycliffe Australia under our Next Step Development initiative, Barton visited our National Centre to look at how we managed our accommodation/conference business and financial accounts. He took some ideas back with him and hatched a successful business plan that saw the BTA centre generate income to cover maintenance and contribute to administrative costs.

BTA then launched a ‘Friends of BTA’ fundraising campaign and organised an ambitious fundraising event in August this year. It was a hit. They had hoped to raise 40,000 kina: they raised 110,000 kina that day. BTA had just taken its next step in its desire for the PNG church to stand alongside the international Christian community as a financial contributor. A strong BTA can bring the strength of the Melanesian way to the remaining Bible translation task. 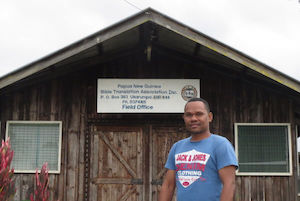 I am grateful for the support and development given to me by Wycliffe Australia. Such investment into BTA capacity building has and will continue to develop BTA into a financially independent organisation so that BTA can be a blessing to other translation organisations.

This is just one example of what we hope to achieve through Wycliffe Australia’s Next Step Development initiative. I am genuinely excited by the impact this initiative will have on strengthening the Bible translation movement and on the development and encouragement of international colleagues.

This story is from Wycliffe Today – November 2016 Edition (PDF)

About the Author: Barry Borneman is the CEO of Wycliffe Australia