ABOVE PHOTO: KALITE AT THE LEWO NEW TESTAMENT DEDICATION, SECOND FROM LEFT

While it has been necessary to send some Wycliffe workers across seas and cultures to undertake Bible translation, equipping members of the Indigenous church is an increasingly vital strategy. 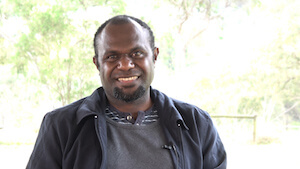 Kalite Tamau has been involved with Vanuatu Bible Translators (VBT) for the last 16 years. Inspired by the stories of Bible translators before him, Kalite began his involvement as a literacy worker on Malakula, his home island in central Vanuatu, where he helped his people read and write in their Uripiv language.

‘God just put in me this love of the people in my community and in my country,’ he said, ‘to help them come to know more about this God and to love him.’

Kalite’s faith in God and love for his Word grew, so he trained to become a Bible translator. He didn’t stop there: he became translation coordinator in his province and is now Chair of Vanuatu Bible Translators (VBT). Each role varies, but the vision remains the same: to help the people of Vanuatu know and love God more.

Kalite believes that having God’s Word in one’s heart language is the best way for someone to know God. ‘I love to see the people of Vanuatu come to pray and sing and feel the love of God with their true heart,’ he said. ‘They get to know God not from other people but from his Word directly.’

In remote areas, children usually only attend school until year six and if they receive a Bible in one of Vanuatu’s national languages (English, French or Bislama – often their second, third or fourth language) it is difficult for them to understand it.

Having the Scriptures in one’s mother tongue overcomes the language barrier and enables people to receive God’s Word at a deeper level.

‘When you hear the Word of God in a different language, it does not speak straight to your heart,’ Kalite said, ‘it only speaks to your mind.’

‘When it is in your own language, it speaks to you, and can dwell in you. And when it dwells in you, you can see good things in the Word of God. It will help you to grow more, to love his Word more, to grow more in his love and to know more about God.’

So when God raises up workers to translate his Word and to make himself known, whom will he send? As has become increasingly evident in modern times, equipping members of the Indigenous church is a vital strategy. Through faithful followers like Kalite, God is making his Word, his love and himself known in fresh and profound ways, bringing transformation to new communities of people.

About the Author: Craig Schneider is a current student at Melbourne School of Theology. He hopes to contribute more directly in a translation project in the future.