ABOVE PHOTO BY ELYSE PATTEN

Join us in thanking and praising God for the completion of a New Testament translation for our neighbours in Vanuatu. This 35-year project has faced many setbacks, but now is the time to celebrate!

The Lewo language community on Epi Island in Vanuatu celebrated the arrival and dedication of the Bible in their own language on 2 March 2017. The east coast of Epi, where the language is centred, is beautiful. The dedication of the Lewo New Testament was held in Nikaura, the major and most central Lewo village, which is also where Ross and Lyndal Webb and Elder Kapiapo have worked in the last years to bring this work to completion. Even though Elder Kapiapo died in 2013, many of his children live in Nikaura, and were there for the dedication with many others from the Lewo language community. 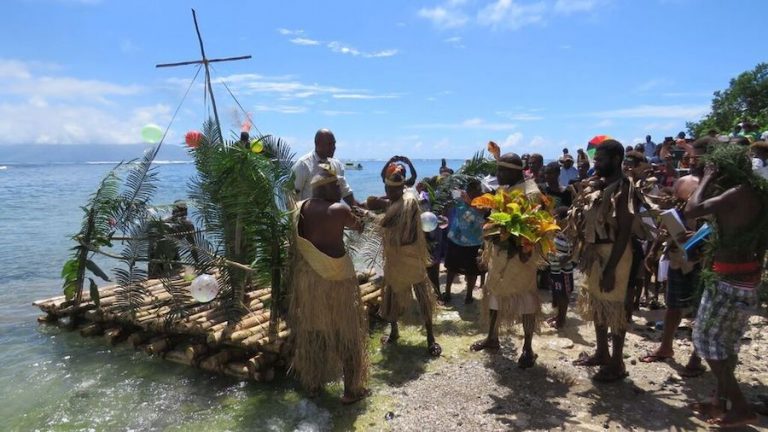 Thirty five years ago, in 1982, a New Zealand family arrived on Epi Island and began the Lewo translation with Elder Kapiapo and Elder Andrew. The project quickly expanded to incorporate two other languages on Epi. The team, consisting of people from the three different language communities, worked from a front-translation prepared by the translation advisor from New Zealand. They worked under the Epi Council of Chiefs and the churches on the island. In those early years the translation program was well known, and many people participated, remembering their time as translators, cooks, and typists, among other roles.

In the late 1990s circumstances changed and progress slowed considerably. A literacy team worked in a few Epi languages in the 1990s, which helped keep things alive into the early 2000s. The translation advisor continued to work on translation while working at the University of the South Pacific.

When the project slowed down and changed, work moved to Port Vila, and the language community gradually became much less aware of and involved in the work. Many of the original translators from the three language groups have died. Community involvement narrowed to one man who travelled back and forth, but he is remembered for his vigorous promotion of the language and especially of songs in Lewo.

Before Elder Kapiapo died in 2013 he appointed a successor, a younger, godly man who has a golden voice and a true gift for reading his language. This man has done much of the audio recording of the Lewo New Testament for release alongside the printed version.

Final push to the finish line

The Lewo translation had been in progress for 20 years before Ross and Lyndal arrived in Vanuatu to take up a leadership role. For 12 years their involvement included organising consultant checking so that it could continue to move forward.

When they finished with their leadership role they offered to take the Lewo New Testament through the final stages of preparation for publication and audio recording.

The three language communities have welcomed Ross and Lyndal, especially the Lewo community and Nikaura village where they live when they are on the island. Coming in at this stage, and working with three different language communities, means that Ross and Lyndal use Bislama to communicate mostly while learning some of each of the three languages as they go. This has made it slightly more difficult to encourage people to understand the Scriptures in their own language, as they are only able to lead people through that process in another language. 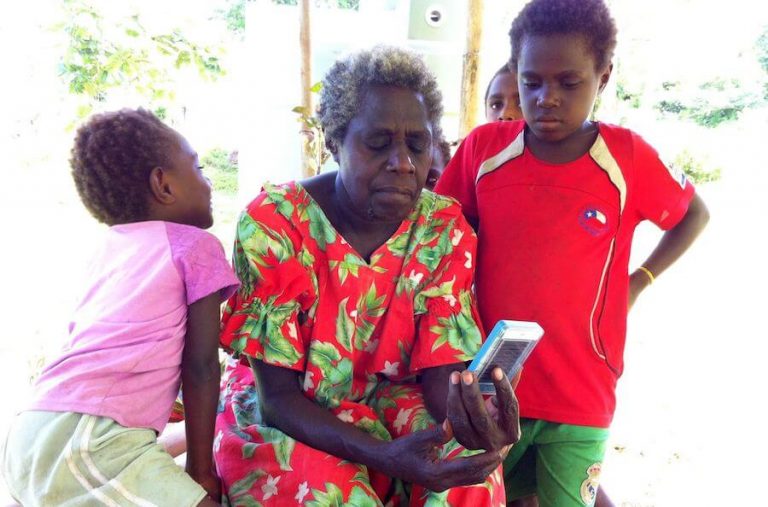 Listening to the Scripture on Megavoice

Ross and Lyndal hope to regain the awareness lost when the project became remote from the language community over the years. When interviewed, they wrote, “It is hard to over-estimate the value of a translation team living and working in the village situation in the Pacific.” Staying in the village for up to 10 weeks at a time, and building relationships and working closely with the Lewo translators on a daily basis has enabled the project to cross the finish line.

The work, however, is ongoing. After the celebration Ross and Lyndal will stay on a little longer in the village. They hope to promote Bible study and encourage locals to listen to the recorded scriptures on Megavoice. The goal of course is not just a completed Bible translation but a heart and life transformation from encountering God through his Word. “Part of the challenge is to help people come to the best understanding of the Scripture – i.e. not only be able to decipher it, but to tackle it (reading or listening) in a way that lets the Bible authors speak their intentions. There is so much blessing to be missed by jumping to the same old conclusions about the same old passages! Our prayer is that many Lewo speakers will wholeheartedly dig into their new Scriptures and encounter the God who loves them.”

This story is from Wycliffe Today – April 2017 Edition (PDF)

About the Author: Sharna