A team of adventurers recently returned from the Australian MAD (Ministry, Adventure and Discipleship) safari, visiting Wycliffe and SIL members living amongst our indigenous communities. Though not an easy trip, Jessica Rogers shares how overcoming hardships let her have meaningful moments where she discovered a possible longer-term call. This is her story.

Walking back from the outhouse, my head torch light was reflecting off several glittery things in the leaf litter. I gently kicked the ground where I could see one of the sparkles, and was surprised to discover that the shiny thing was a spider. Every sparkle I could see, glittering along the ground, was a spider’s eye. I was suddenly aware of just how many spiders were hiding on the bush floor.

That night I was depressed. I had spent nearly two weeks on MAD, and I was exhausted. I was ready to give up and go home, convinced that mission was no place for someone with anxiety, depression, and insomnia.

Sitting in my tent, I cried out to God, reminding Him that this was all His idea.

I thought about how I could get myself from Katherine to Darwin without continuing the MAD Safari to a place south-west of Darwin, called Wadeye. We had been warned that the beach on which we would be staying would have no running water, no toilets, and plenty of mosquitoes. Knowing from experience that mosquitoes can lead me to panic attacks, and it would only get harder to sleep, I contemplated how I could avoid going altogether.

Despite my hesitation, I continued anyway. I’m so glad I did.

Our second-last night at Kurantiga beach, a family property in Wadeye, I was sitting on the sand as the last of our private fireworks exploded into the night sky. Two little girls came up to me. They were Murrinh-Patha girls from the family with whom we were staying. Munmun said, ‘She has a gift for you’. Then Veronica handed me a small bottle of glitter nail polish. Torn between my instinct to refuse a gift that I knew was worth much more to her than to me, and knowing by my own love language how wrong it would be to refuse this generous gift, I accepted and responded with a heartfelt thank you and a hug.

The next day Veronica’s family took us out to climb Big Sand, an enormous orange sand dune that required three steps forward, one step slipping back, to climb. Walking across the Big Sand was like walking across the desert, only you’re closer to the sun, so it’s hotter! 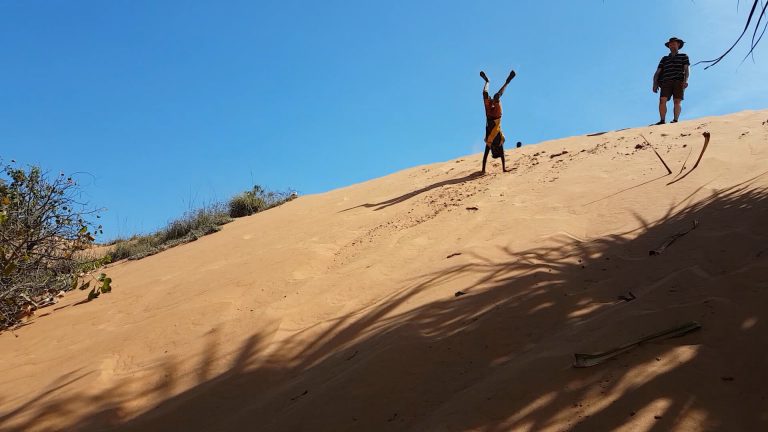 Reaching the edge of Big Sand I was rewarded by the sight of people enjoying the water. There was a secret beach! After wading into the refreshing salt water, Veronica and Munmun found me and we chased the calm waves, while the older men stood at lookout, watching for crocodiles.

In the water together, Veronica gave me a second gift, a blackfella name. Munmun explained that it was Veronica’s blackfella name. Although excited to have a local name, as some of our group had likewise been blessed, I didn’t fully appreciate the significance until later that afternoon. I found Veronica’s mum and dad, Nunciatta and Edmund, waiting on the edge of Big Sand, making sure all us whitefellas got back safely, and I thanked them for taking care of us. On my way down the dune, Edmund told me about my new name. He said it was his gift to me, and it was not only Veronica’s name, but also her grandmother’s name. And it was his family totem, the honeybee.

To be given a blackfella name was to be accepted as family.

That night I assembled a gift for Veronica. I was limited by what I had on hand, since a run to the shops was not an option out there. I found two Chupa-Chups, a small Bible verse card, and decided to include my own pair of glitter sandals. The sandals had been much admired by the local girls since my arrival, because of their sparkles, and I hoped that Veronica would enjoy wearing them once she grew into them. I gave Veronica my gift the day we left, and I think I left a piece of my heart with her also.

I was truly blessed to have met the people at Kurantiga, and fully intend to return to Wadeye as soon as God allows.

I have begun teaching myself the local language of Murrinh-Patha in the hopes that someday I will get to work with the people of Wadeye on their heart language Scriptures.

The MAD safari was not an easy trip, but God sustained me through it. I shouldn’t be surprised that the enemy tried to keep me from completing the journey, and I have to remind myself that no matter my own weakness, God is strong. He will give us strength to do things we never thought we could.

This story is from Wycliffe Today – October 2017 Edition (PDF) 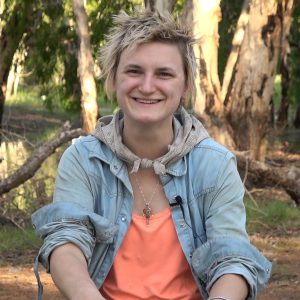